In this second Dog-Talk I will tell you why we failed and we don’t regret.

Vanlife is not always about good weather, sometimes it sucks. This is the second try because the first Dog-Talk was a little bit disturbing because of the wind and the gopro. We try it again. Let’s do a Dog-Talk. We failed and actually we don’t regret it! Because as i said in the first Dog-Walk and in the introduction video, you have to fail so we did it actually and we don’t regret, because it’s a learning process also for us. You might ask: Okay and in what kind did you fail? That you are now in that bad weather condition? No it’s not the fail! It was like where we first have been, it was too hot for the dogs that was the reason we decided to get up into the Bulgarian hills. When we were down at the lake and the riverside it was actually too hot. So in some kind I like this, I really like this weather condition. Let’s talk about our failure. Maybe the reason why you are watching the video. It’s necessary to fail. How did we fail? So we decided in the first step, I decided to be honest, I decided to do videos in English because I wanted to practice my english and I thought it would be nice to have English content because you can reach out to so many people all around Europe, all around the world that are traveling in a van, but actually it came out that the English content is not so easy to produce. Especially for the Site-Rating videos. We have to prepare a lot. Especially for Kathy, because her English is not that good. I don’t want to say that my english is really really good, because I’m talking really simple. We had to overthink it how to produce more videos without that preparation beforeso that we could only bring one video a week. And in everyday life we are talking german, so it’s difficult to switch to always speak English. So the last week I thought about a lot regarding the youtube channel and I came to the result that we have two options. So if we want to continue content in English, Kathy wouldn’t be in, because it’s too hard. It’s absolutely too hard for her to express all her feelings, all her thinkings about the places, about what we are doing right now. It’s, she always has to think: Okay how to say it? What do i say? And it always sounds a little bit like, it’s not real, you know? And i don’t want to do any content on this channel, where we have to do things that are not us. So for me especially the Dog-Talks, I like the Dog-Talks, but at some point, depends on the day, it’s hard for me to do it in English, because at some point I don’t think English, you know. So it’s more easy to do it in German, because it’s native language and it’s much more easy. It was my idea that I thought, okay let’s do it in English. We have to challenge ourselves a little bit and it would be nice to do that in English, absolutely it is and it also is challenging because you have to think a lot, but especially for Kathy it’s a little bit too much. She can’t express everything she wanted to say. She always ends in: It’s a nice place! It’s nice, it’s nice! And she could say more about things. This is a reason why we failed, because in the first step I decided to do all the content in English and I figured out that it’s too hard. So for the future videos we will do content in German language, but and this is what I also said in the questions about change video, the first Dog-Talk and the second introduction video. Since then I was struggling, doing content in English because you have to figure out what what to do. You could say okay we’re finishing, we are not doing content in English anymore and that’s it. Get along with it, but even with a few videos I have on youtube now, I don’t want to be like so.:

Now we are only doing content in German and that’s it, get along with it. In my opinion we got the best middleway, the best like to do it without cancelling everything. So there’s a good feature on youtube with undertitles. I don’t mean the auto-generated undertitles. We want to invest a lot of time into generating good undertitles. We now managed to translate our English content in at least nine undertitle languages, which is kind of challenging, because you need a lot of time to generate a good undertitle. Not the auto-generated from youtube. To rewrite the undertitle from youtube and then to translate it in the different languages. So this is for us the middleway between: We can also reach out to people that don’t speak German or understand German language and to be authentic and to do stuff we really do, without uh thinking about: Oh there’s a camera, we have to talk in English! We have to switch language, that we in in normal everyday life… We are speaking german that’s what we do, because it’s easier for us as everyone that speaks a native language knows. It’s even easier if you speak in your native language than to try to speak in a language you don’t speak everyday. So we figured out the idea with the undertitle and that we could do our content in German, but we invest a lot of time into the undertitles, that these are really good undertitles that also match the content right. Not the untertitle that is auto-generated and has words in it. It’s some kind of a fail for me to be honest. It feels a little bit like: Ah tried it and didn’t work out. But this is how it’s going. This is our first youtube channel, we try a lot of things even with videos. We have to figure out a lot on youtube. We tried to improve our thumbnails, how we are generating videos and to be honest,  it’s easier for me to do content in German, because i can just take the camera walk away and  talk like I think and especially with complex topics, it’s not always that easy to express it in English. Yes, that’s the Dog-Talk number two as we, ourself fail and to be honest it’s not just about this topic. We really fail a lot as I said in the in the first Dog-Talk. We fail a lot at things but in three years traveling with campervans, traveling in a car, living in a car we figured out that sometimes time is regulating it by itself and it’s always not like… You find a solution and we try to find the solution for our youtube-fail till now, that we said we are doing content in English and I really was like: Yes i want to do it in English, but if you really want to get into “how is our life working” and that Kathy also could give her part to the content, it’s necessary to find a way where she can do it without any barrier so she’s part of that and i want her to be part of it, so we had to find a solution how we both could express what we really feel, think, how we think about places and there we are coming to the Site Rating, which i don’t know if it’s a good content. I like the idea of that but till now maybe we also have to change a lot with the site ratings. And I hope, I really hope the site ratings will get more quality stuff by changing the language into German because Kathy has to say a lot about the places but for her it’s really difficult to express what she thinks about this places, in English. So it ends into this: It’s a really nice place. And it shouldn’t be like that, you know. So the the concept of site rating is a really, in my opinion, it’s a really good concept, because in in a lot of cases we had like traveling with Park4Night. We ended up in a place, in most cases we drove really, really far to get to these places and then we found out that the place we saw on the rating page wasn’t like we thought and so the site rating concept in my opinion gives you, if you are traveling to Bulgaria you say there were people in Bulgaria before and they rated some good places, we are having dogs, we want to camp wild and we want to know what this place looks like before. We get there and before we are driving 300 kilometers to get to this place that in the imagination is a good place.

So this is a concept behind that, that we combine with Park4Night and can show the people a little bit more of the places that Park4Night couldn’t. So I think it’s a good concept. I think we have to improve that concept for sure, and I’m also sure not everyone likes that concept because not everyone is thinking about traveling to Bulgaria. But it also gives you a little bit of impression of Bulgaria. So if we are parking on some places and show you around you get a little bit of an impression of Bulgaria because I know that a lot of people have some weird thinking about Romania and Bulgaria. In my opinion it’s worth to show that Bulgaria has a beautiful landscape, Romania as well. And that you have a lot of freedom here, that for example you don’t have any more in Portugal. So yes, that’s it i guess. I don’t have to say more for the Dog-Talk number two. So we are changing our content to German language with undertitles in nine languages. You are really welcome to watch the German content in future, if you speak German, understand German or you like to read undertitles. With this mindset I have to tell you till next time 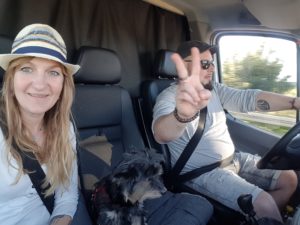 Welcome to VollzeitVanlife and the corresponding blog site. Here everything revolves around the topic of “travel, live and work remote as a digital nomad in Europe”.

You have questions about “living and working as a digital nomad in Europe” or in general about our travels or our two vehicles? Just write to us via one of the social media channels. We are always happy about new contacts.

Some parts of this website were translated with www.DeepL.com/Translator (free version). Thx for the support.